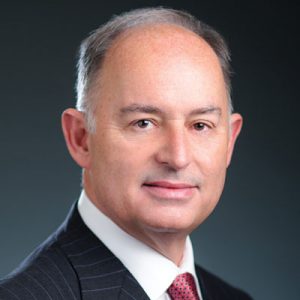 Lanny Griffith is CEO of BGR Group, a lobbying firm based in Washington, D.C.

On Jan. 20, 1989, Griffith was sworn in as special assistant to the president, serving as President George H.W. Bush’s liaison to governors and other statewide elected officials. At the White House, he was a principal architect of Bush’s 1989 Education Summit in Charlottesville, Virginia, and also was involved in the development of the National Goals for Education.

The U.S. Senate confirmed Griffith as assistant secretary of education in February 1992. At the Department of Education, Griffith directed Secretary Lamar Alexander’s successful effort to build a national consensus around educational standards and testing. He also managed the launch of the GI Bill for Children; coordinated the administration’s role on the National Education Goals Panel; represented the U.S. at the Paris-based Organization for Economic Cooperation and Development; and served as co-chairman of the Advisory Council on Dependent Education.

Griffith’s political career dates back to the early 1980s, when he worked for the Republican National Committee, managed Haley Barbour’s U.S. Senate race and served as the executive director of the Mississippi Republican Party for three years. He was Southern political director for Vice President Bush’s presidential campaign in 1988. He was national chairman of the Bush-Cheney 2000 Entertainment Task Force and entertainment coordinator for the 2001 Bush Inaugural, later serving as a Ranger and a member of the Bush 2004 National Finance Committee. In 1998, he served as a transition director for Gov.-elect Jeb Bush.

Griffith is a founder of the Trust for the National Mall, where he serves on the board of directors. An elder in the Presbyterian Church, he chairs the Westminster Presbyterian Foundation. He received his undergraduate degree and J.D. from the University of Mississippi. Lanny and his wife, Susan, reside in Alexandria, Virginia.