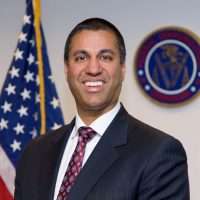 Chairman of the Federal Communications Commission

Ajit Pai is the 34th Chairman of the Federal Communications Commission. He was designated Chairman by President Donald J. Trump in January 2017. He previously served as a Commissioner at the FCC, appointed by then-President Barack Obama and confirmed unanimously by the United States Senate in 2012.

Chairman Pai has spent more than two decades in public service, spanning all branches of the federal government. In addition to serving at the FCC, he has worked at the Department of Justice, the U.S. Senate, and clerked in the U.S. District Court. At the FCC, Chairman Pai’s top priority is closing the digital divide and providing all Americans with digital opportunity.

Chairman Pai graduated with honors from Harvard University and from the University of Chicago Law School. Chairman Pai is the son of immigrants from India and grew up in Parsons, Kansas.