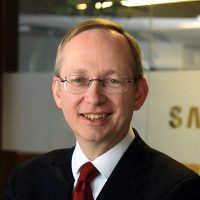 Dr. Steel has more than a decade of experience within the Samsung network, most recently serving as head of the company’s Global Communications Group in Seoul, South Korea. He first joined Samsung in 1997 in the Global Strategy Group, managing strategy and business development. He went on to hold several other high-level positions, eventually becoming Samsung’s first non-Korean corporate executive when appointed to serve as Vice President and Head of Marketing for the Digital Media Business in 2002. In that role, Dr. Steel was responsible for establishing the role of marketing within Samsung’s $25 billion consumer electronics business. He later oversaw marketing strategy for the mobile phones business. Between 2008 and 2014, he ran corporate strategy, marketing, and communications in his capacity as Executive Vice President of SEA.

Prior to joining Samsung, Dr. Steel worked at the global consulting firm McKinsey & Co. and Argonne National Laboratory of the U.S. Department of Energy. He holds a Ph.D. in Physics from MIT, an M.B.A. with Honors from the University of Chicago, and a B.A. in Physics from Oxford University. While at MIT, he was presented with the Karl Taylor Compton Prize, the university’s highest award for achievements in citizenship. He spent 2017 as an Advanced Leadership Fellow at Harvard University. A Chartered Physicist (UK), Dr. Steel is a member of the Institute of Physics (UK) and the American Physical Society. He also serves on the Paralympic Advisory Committee of the US Olympic Committee and is a past member of the Royal Asiatic Society Korea Branch council and the Korean American Community Foundation board.