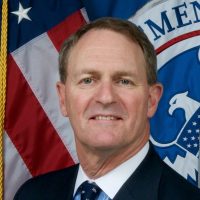 In August 2015, John Felker assumed day-to-day operation of the National Cybersecurity and Communications Integration Center (NCCIC) at DHS. The NCCIC is the U.S. government’s 24/7 hub for cybersecurity information sharing, incident response, and coordination.

Prior to joining DHS, Felker served as Director of Cyber and Intelligence Strategy for HP Enterprise Services. During a 30-year career in the U.S. Coast Guard, Felker served, among other positions, as Deputy Commander of Coast Guard Cyber Command, where he was responsible for the day-to-day staff leadership and also for the stand-up of the Command. He also commanded the U.S. Coast Guard Cryptologic Group, which spanned subordinate units from Hawaii to Afghanistan performing signals intelligence missions and developing Coast Guard signals intelligence capability. He also served as executive assistant to the Director of Coast Guard Intelligence, where he coordinated Directorate activities within the National Intelligence Community management enterprise.

Felker’s military awards include the Defense Superior Service Medal, the Legion of Merit, and the Meritorious Service Medal. He graduated from Ithaca College with a bachelor’s of science in 1978 and earned his master of arts in Public Administration from the Maxwell School of Citizenship and Public Affairs at Syracuse University in 1995.